Come to listen to speakers, participate in dialogues, attend workshops,
and enjoy the beauty of the Oak Grove School campus.

Sign-Up for Lunch
Register Here to Live Stream the Gathering

In the Student Center

Tea and School Tour with Head of School, Jodi Grass.  Meet in the Main House.

Collect your pre-ordered lunch ticket or purchase one at the information hub.  Lunch will be available at the Main House servery.

In the Student Center

Collect your pre-ordered lunch ticket or purchase one at the information hub.  Lunch will be available at the Main House servery.

We invite you to our Annual May Gathering, May 7th and 8th, 2022, taking place at Oak Grove School (OGS) in Ojai. Friends both local and from around the world come to listen to speakers, participate in discussions and dialogues, attend workshops, and enjoy the beauty of the Oak Grove School campus while hanging out with friends old and new. Choose from different programs or engage with teachers from our schools and scholars of Krishnamurti’s teachings who share their understanding.

For this year we have chosen the theme, What Are You Looking For?

I don’t know if you have ever noticed what sometimes happens when you have a  problem, whether mathematical or psychological.  You think about it a great deal, you worry over it like a dog chewing on a bone, but you can’t find an answer.  Then you let it alone, you go away from it, you take a walk; and suddenly, out of that emptiness, comes the answer.  Now, how does this take place?  Your mind has been very active within its own limitations about that problem, but you have not found the answer, so you have put the problem aside.  Then your mind becomes somewhat quiet, somewhat still, empty; and in that stillness, that emptiness the problem is resolved.  Similarly, when one dies each minute to the inward environment, to the inward commitments, to the inward memories, to the inward securities and agonies, there is then an emptiness in which alone a new thing can take place.  -Krishnamurti

The focus of this Gathering will also be to have speakers and dialogues aiming at exploring this theme in a wide context.

For two days we have speakers plus organized dialogues. 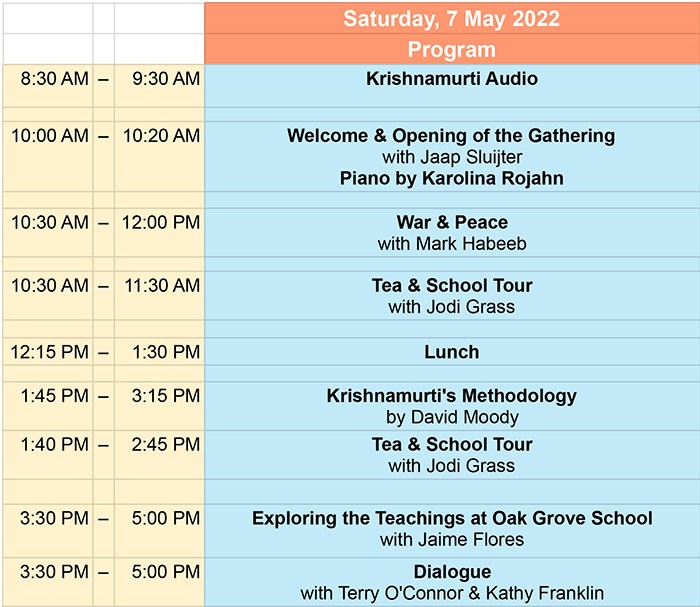 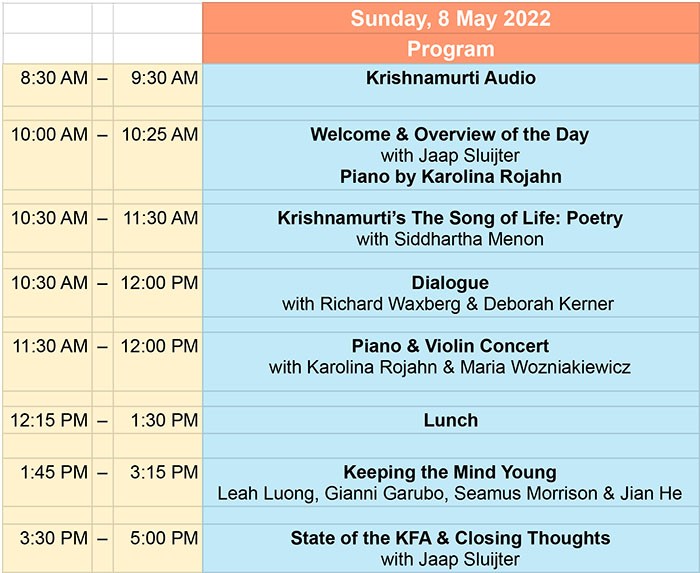 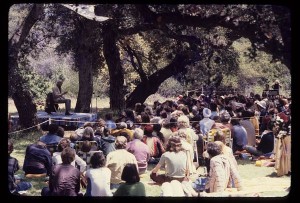 Jaap Sluijter has a long-standing interest in the questions raised by J. Krishnamurti. Currently, Jaap is the Executive Director of the Krishnamurti Foundation of America, he is in this position for almost 8 years. Previously, he lived and taught for nine years at Brockwood Park School in England. He has an MA in Mechanical Engineering and worked as a design engineer in the field of camera systems and musical instruments.

Jaap will present an overview of the past, present and future work of the Foundation.

Mark Habeeb is Professor of Global Politics and Security at Georgetown University’s School of Foreign Service in Washington, DC, where his specialty is international negotiation, conflict management, and the role of identity processes in group violence. He is a Fellow of the Middle East Studies Association, a member of the Society for the Psychological Study of Social Issues, and a member of the Board of Virginia Humanities. From 1988 to 1991 he was Chairman of the Forum for US-Soviet Dialogue. He has published widely in his field and in 2021 published his first novel. Mark received his PhD from Johns Hopkins University and also studied at the University of Sussex and the Washington Psychoanalytic Institute. He has studied the teachings of Krishnamurti for over 30 years.

Mark will present: War and Peace

David Edmund Moody, PhD, is the author of Krishnamurti in America: New Perspectives on the Man and his Message.  David worked closely with Krishnamurti in his capacity as director of the Oak Grove School, the position he held at the time of Krishnamurti’s death.  David’s previous book was An Uncommon Collaboration: David Bohm and J. Krishnamurti.  As a result of this book he was selected to participate in the recent documentary film about Bohm, Infinite Potential.  Additional information about David and his books is available at DavidEdmundMoody.com.

Siddhartha Menon is a trustee of the KFI, a former principal of Rishi Valley School, and currently director of the Rajghat Education Centre. He is also an alumnus of RVS and has been working in the Krishnamurti schools for more than thirty years. He has published four collections of poetry.

Siddhart will present: Krishnamurti’s The Song of Life: Soul Making and Poetry.

Jodi Grass has worked at the school and the foundation in different capacities since 2005. Currently, Jodi is in her fifth year as Head of School. Although in her words, “I don’t feel as though I “work” at Oak Grove.  I spend my days here out of a deep devotion to the Intent of the school as originally shared by Krishnamurti in 1975.”

Jodi will lead 2 tours of the campus with a focus on relationship with self, other, the world.

Jaime Flores was first introduced to meditative practices and Eastern Spirituality while studying for a BA in Graphic Design in his hometown of Quito Ecuador.  He currently works at Oak Grove School as the IT Coordinator and has also previously worked at the Krishnamurti Foundation of America in the same capacity.

Jaime will be presenting: Exploring K’s Teachings with Parents

Karolina Rojahn is a Los Angeles based classical pianist and multidisciplinary artist who has dedicated the last decade of her career to premiering and recording contemporary classical repertoire. She is a co-founder and artistic director of Merge Collaborative, a cross disciplinary concert series in Los Angeles that brings together various disciplines of art into salon-style performances centered around socially relevant themes. Karolina has collaborated with various classical music labels and has released over 40 albums of solo piano and chamber music, in addition to recording for television and film. Karolina was born in Warsaw, Poland, but was educated in Boston. She received a Bachelor’s and Master’s degrees in Piano Performance from the Boston Conservatory at Berklee, where she later served as a faculty member. Karolina’s mission as an artist and performer is to reach beyond the traditional constructs of classical music performance: to invite mindfulness, cross-disciplinary collaboration and soulful dialogue.

Leah Luong has a B.A. in Political Science (Global Politics) from California State University, Long Beach. She has been involved in the dissemination of Krishnamurti’s teachings with the KFA after attending a retreat in Ojai. Raised amongst communities of dogmatic institutions and groups, Leah’s interest in questioning the truth from a young age was inevitable.

Gianni Garubo was first introduced to Krishnamurti’s work as a student at Oak Grove School. He has a B.A. in Liberal Arts (Philosophy & History of Mathematics/Science with minors in Classical Studies & Comparative Literature) from St. John’s College. He currently works at the Krishnamurti Foundation assisting the Development team and at the Oak Grove school as a teacher’s aide for the 2nd grade.

Kathy Franklin and Terry O’Connor are retired psychotherapists who found Krishnamurti’s teachings invaluable in their work. They have hosted a monthly dialogue in their home since 1992, and have organized the annual Memorial Day Krishnamurti Dialogue and Gathering in Maryland since it began in 1995.

Deborah Kerner and Richard Waxberg live in Ojai, California. They are both practicing artists. They taught several art and design courses at the Rishi Valley School in rural Andra Pradesh, India, a school based on Krishnamurti’s teachings located near his birthplace. Both Richard and Deborah had successful careers in New York City as designers. Richard taught art and design, aesthetics and art history at the prestigious Parsons School of Design. They created the Explorations into Freedom Intensive Retreats for the KFA and offer two 8-day retreats each year at the Krishnamurti Center in Ojai, in June and October. They have also facilitated retreats in British Columbia, Canada and Denmark. 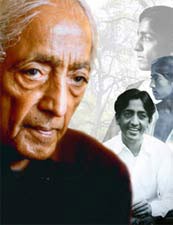 This exhibit draws on materials from the archives of the various Krishnamurti Foundations. It will be on display in several locations around the world.

An exhibit placing the trajectory of Krishnamurti’s life and teachings in the context of 20th century world events is inherently interesting. This juxtaposition of global and personal history is accomplished through a circular set of nineteen freestanding panels, each eight feet tall by three feet wide. As the participant walks the outer perimeter, world history and Krishnamurti’s emerging teaching activity unfold with events, dates, times, images, people and happenings worldwide during Krishnamurti’s lifetime. The world history timeline is in five-year segments and covers important political, cultural, art, media, international, and national events.

Upon coming to the conclusion of Krishnamurti’s extraordinary life in 1986, one turns to the inside perimeter of the spiraling panels. Insights from his writings are joined with a series of mural photos of the grove of oak trees where Krishnamurti spoke in California from 1922 onward. The mental chatter slows and stillness manifest as an oasis for quiet reflection and contemplation of the central issues of human existence: what is sacred in life; how can one live holistically and not fragmented; and what is the meaning of life?

Maps were disabled by the visitor on this site. Click to open the map in a new window.

Who is this for 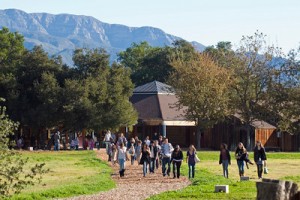